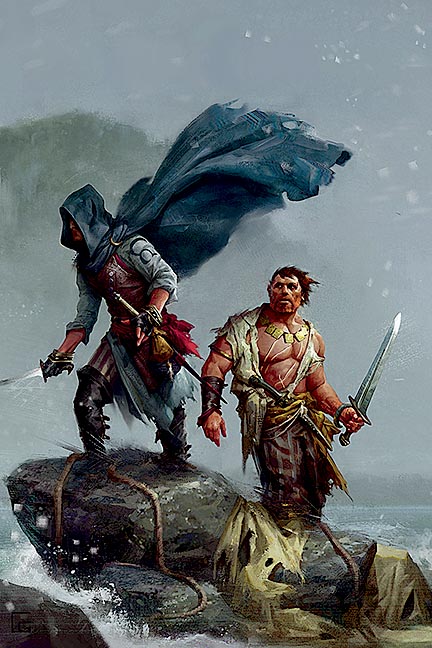 Swords in the Mist by Centipede Press

Just a reminder, centipede press are up to Swords in the Mist, these really are beautiful issues, from the artwork, to layout to notes and articles in the edition, really  a must for any collector… 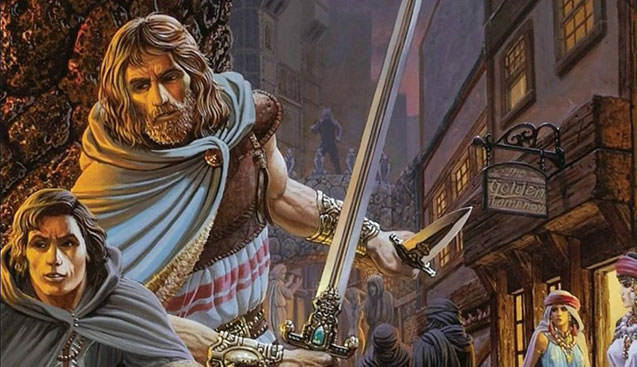 The Cromcast: A Weird Fiction Podcast

Head over to The Cromcast where you can hear Jon, Josh and Luke chat about several Lankhmar stories, these are funny and engaging as well as interesting listens, (as is the rest of their podcasts) so do yourself a favour and give them a listen, Fritz podcasts are so rare!

Centipede press are releasing Fritz’s Swords series!  Artwork from Tom Kidd looks lovely, and I suspect these will be highly sought after.

“Swords and Deviltry features five color interior illustrations, a full-color frontispiece, full color wraparound dustjacket, and custom illustrated endpapers. The introduction is by Michael Moorcock. The book includes all of the stories that make up Swords and Deviltry along with two archival essays by Harry O. Fischer, Fritz Leiber’s 1973 introduction, two “Gray Mouser” poems from The Acolyte, and an interview with Fritz Leiber from 1979. Yes, we will be publishing the entire series of novels, each one with a load of extras. This is the ultimate edition of this legendary fantasy series. ” read more

The Savage World of Lankhmar brings Fritz Leiber’s gritty world of urban fantasy into Savage Worlds, shepherded by Tim Brown (of Dark Sun and Dragon King fame) and Shane Hensley (who wrote the Lankhmar boxed set for TSR back in 1997)!

Watch for Lankhmar: City of Thieves, detailing the city itself and its most important players—including Fafhrd and the Gray Mouser.

Savage Foes of Nehwon brings you the most insidious threats—powerful sorcerers, terrible creatures, and ruthless villains—with adventure seeds and Savage Tales to really fill out a campaign. read more

Bazaar of the Bizarre – The Silver Eel 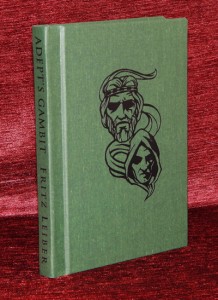 A book containing anything new by Fritz is always welcome. After the wealth of material in the Midnight House collections and Strange Wonders, it had all gone a little quiet, til Miskatonic Books announced their release of Fritz’s original (circa ’36) version of Adept’s Gambit, complete with HP Lovecraft’s thoughts and annotations.

Adept’s Gambit always seemed an untypical Fafhrd & Mouser story.  The tone seemed akin to The Bleak Shore and The Howlng Tower, yet it was full of commentary and farce the we would see again in Lean Times in Lankhmar or Swords of Lankhmar.  There is also the strange sexuality running through the book (which Leiber himself had noted and is referenced in this new book)which gave it a more spicy feeling than many of the other stories. read more 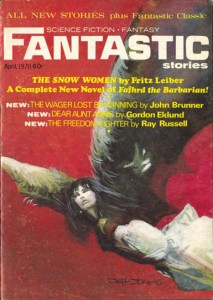 He had already visited the antecedents of the Gray Mouser in 1962’s  ‘The Unholy Grail’, in ‘The Snow Women’ we follow Fafhrd’s earliest adventure. There was a feeling of gothic in the Unholy Grail, with it’s mad lord, dungeons and waif like heroine, but the  Snow Women, written in 1970, is much more typical of Leiber’s later work. read more

237 Talking Statues Etc : A Bit of the Dark World : A Deskful of Girls : A Hitch in Space : A Pail of Air : A Rite of Spring : Adept's Gambit : Adventures of a Balloon : Alice and the Allergy : America the Beautiful : Answering Service : Appointment in Tomorrow : art : Bazaar of the Bizarre : Beauty and the Beasts : Belsen Express : Black Corridoor : Black Glass : Black Has Its Charms : Blog : Bread Overhead : Bullet with His Name : Business of Killing : Cat Three : Cat's Cradle : Catch That Zeppelin! : centipede press : Children of Jerusalem : Clark Ashton Smith : Claws from the Night : Collection : Coming Attraction : Concerning Tribalism and Loving the World : Crazy Annaoj : Cry Witch! : Damnation Morning : Dark Wings : Deadly Moon : Diary in the Snow : Do You Know Dave Wenzel? : Dr. Adams' Garden of Evil : Dr. Kometevsky's Day : Endfray of the Ofay : Far Reach to Cygnus : Femmequin 973 : Four Ghosts in Hamlet : Friends and Enemies : Fritz Leiber : Further Adventures of a Balloon : Gonna Roll the Bones : H P Lovecraft : Hatchery of Dreams : Horrible Imaginings : Hugo : I'm Looking for "Jeff" : Ill Met in Lankhmar : In the Beginning : In the Witch's Tent : In the X-Ray : Induction : Insanity(2) : Knight to Move : Kreativity for Kats : Lankhmar : Later Than You Think : Lean Times in Lankhmar : Let Freedom Ring : Lie Still, Snow White : Little Old Miss Macbeth : Mariana : Martians, Keep Out! : Midnight by the Morphy Watch : Midnight in the Mirror World : Mirror : Moon Duel : Mr. Bauer and the Atoms : Mysterious Doings in the Metropolitan Museum : Nice Girl with Five Husbands : Night Passage : No Great Magic : One Station of the Way : Our Lady of Darkness : Our Saucer Vacation : Pipe Dream : Poor Superman : Predator Universe : Privacy : Quicks Around the Zodiac: A Farce : Ray Bradbury : Replacement for Wilmer: A Ghost Story : Riches and Power : Richmond Late September 1849 : Rime Isle : Rump-Titty-Titty-Tum-TAH-Tee : Sanity : Schizo Jimmie : Scream Wolf : Sea Magic : Semicentennial : Ship of Shadows : Skinny's Wonderful : Smoke Ghost : Snow White : Social Inventor : Space-Time for Springers : Spider Mansion : Stardock : The 64-Square Madhouse : The Adventurer : The Automatic Pistol : The Bait : The Beat Cluster : The Big Engine : The Big Holiday : The Big Time : The Big Trek : The Black Ewe : The Black Gondolier : The Bleak Shore : The Button Molder : The Casket-Demon : The Cat Hotel : The Circle Curse : The Cloud of Hate : The Creature from Cleveland Depths : The Curse of the Smalls and the Stars : The Dead Man : The Dealings of Daniel Kesserich : The Death of Princes : The Dreams of Albert Moreland : The Enchanted Forest : The Enormous Bedroom : The Foxholes of Mars : The Frost Monstreme : The Ghost Light : The Girl with the Hungry Eyes : The Glove : The Goggles of Dr. Dragonet : The Good New Days : The Green Millenium : The Haunted Future : The Hill and the Hole : The Hound : The House of Mrs. Delgato : The Howling Tower : The Improper Authorities : The Jewels in the Forest : The Last Letter : The Lion and the Lamb : The Lords of Quarmall : The Lotus Eaters : The Lust of the Alien : The Man Who Made Friends with Electricity : The Man Who Never Grew Young : The Man Who Was Married to Space and Time : The Mer She : The Mind Spider : The Moon Is Green : The Mouser Goes Below : The Mutant's Brother : The Night He Cried : The Night of the Long Knives : The Number of the Beast : The Oldest Soldier : The Phantom Slayer : The Power of the Puppets : The Price of Pain-Ease : The Reward : The Road to Jordan : The Sadness of the Executioner : The Secret Songs : The Seven Black Priests : The Ship Sails at Midnight : The Snow Women : The Snowbank Orbit : The Sunken Land : The Terror from the Depths : The Thirteenth Step : The Two Best Thieves in Lankhmar : The Unholy Grail : The wanderer : The Winter Flies : The Wrong Branch : Their Mistress, the Sea : Thieves' House : Thought : Thrice the Brinded Cat : Time Fighter : To Arkham and the Stars : Trapped in the Sea of Stars : Trapped in the Shadowland : Try and Change The Past : Under the Thumbs of the Gods : Waif? : Wanted - An Enemy : What's He Doing In There? : When the Change-Winds Blow : When the Sea-King's Away : Yesterday House : You're All Alone