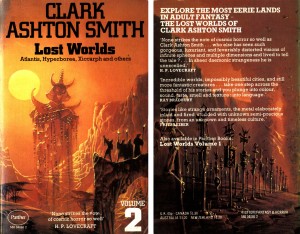 Two weeks of relaxing on holiday in the south west of France, with my wife and children, gave me more time that usual for reading and, of course, some Fritz was part of the feast, I have written this blog entry over the last couple of weeks, and found myself trying to remember how and when I discovered various authors.

The first book I revisited was Lost Worlds vol. 2 by Clark Ashton Smith, and I have to thank it indirectly for my discovery of Fritz Leiber.  I guess I would have been around 15  and was reading typical eighties horror / fantasy and SF.   Stephen King, James Herbert, Harry Harrison and Larry Niven.  Basically what was available at my local bookshop in Peterborough, which in all honesty wasn’t very much; had I lived in Cambridge, I may have had a better range. I was reading through David Edding’s Belgariad series without any huge enthusiasm, so I had a rummage on the bookshelf in our living room.

My Mother read drama and biography, my Dad was a great reader of spy thrillers, Deighton, Le Carre, more general war fact and fiction, as well as lots of books on theatre and drama.  I have come to love Deighton and Le Carre, but they held no interest to my 14 year old self.  There were well thumbed copies of Lord of the Rings and The Hobbit, I had enjoyed the latter and struggled through the former finding in dry and slow in places.  Then I found Lost Worlds Vol.2, to this day I do not know what it was doing there.  I mentioned it to my Dad a few years later and he had never heard of it.

So fate placed this rather tatty paperback in my hand.  The cover was terrific, and inside I found a whole new world !  The texture of the language, the narratives, everything was so far away from what I had been reading, which seemed so much more direct.  I was hooked and decided I was going to find more Clark Ashton Smith.  I also noticed these intriguing names on the back.  H P Lovecraft, Fritz Leiber and Ray Bradbury.  The latter I was aware of, there had been the weird, slightly unsettling TV series, and I knew I had seen some of books for sale.

My hopes of finding Clark Ashton Smith were dashed, nothing to be found in either Sherrat & Hughes, W H Smith or the book stall on the market. But I did find books by H P Lovecraft and Ray Bradbury.  I came home the proud owner of The Small Assassin and The Haunter of the Dark and Other Tales of Terror, over the next few years I snatched up everything I saw by Lovecraft, Bradbury and Smith, and on a trip to Brighton, I saw a book by Fritz Leiber, Swords Against Death.

The first story I read was ‘The Bleak Shore’, there was definitely that strange texture I associated with Lovecraft and Smith, but more but with a healthy dose of realism, and as I read more I discovered an sharp and witty sense of humour too.  I was hooked.

So one small paperback led me to find a whole new area of literature, and a lifelong passion.  I hadn’t read Lost Worlds for many years, but that strange sense of dread and melancholy was still there and for anyone who has not read read Clark Ashton Smith, it is well worth a read. 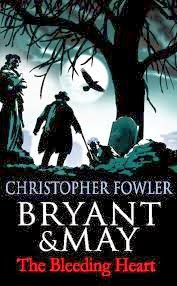 Christopher Fowler‘s Bryant & May series has become a firm favourite of mine.  I had a week where I was going to be driving backwards and forwards to London so bought the audiobook CD.  I was hooked (for audiobook fans The Bryant and May books are read quite brilliantly by Tim Goodman, I reviewed it several years ago on my radio reviews site), the series has gone from strength to strength and remains a very strong series.  The Bleeding Heart proved to be another excellent novel balancing humour, thrills and fascinating facts with a wonderfully realised cast of characters.  It is lovely to follow a series of books which has not gone down in quality over the course of the books.  If you want to enjoy some great crime fiction, then you have to give these series of books a go.

The Fritz book I chose to revisit was Conjure Wife.  Probably his most famous novel, I am always struck by how easy it is to read.  The opening scene with Norman being somewhat self indulgent and self important immediately set’s one off balance.  If this is our hero, why is he gazing at his navel and spying on his wife… 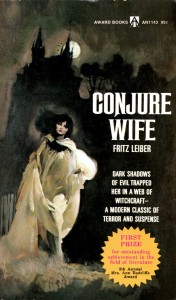 I don’t want to enter into discussion on the role of the feminine in the novel, I feel it is a very complex issue.  Norman is undercut at several points in the narrative, and only really proves effective when he loses his intellectual arrogance and does what Tansy tells him, so the male hero only arrives at that status by the end of the novel.  The college life is well drawn, and the tension of witchcraft rides well on this bed of mistrust, intrigue and hostility. These are key, it is this life of both the intellect and backbiting and intrigue which give the central thread of the novel such a feeling of realism.

The standout moments are two key sections. The scene where Tansy is using a cats cradle to capture the approaching stone lizard and the following delirious scenes where Norman realises he is destined to die and Tansy drunkenly takes his torments away and places them on herself.

The scenes following Tansy’s emergence from the water are just wonderful, with discussions of souls and the key scene where the ordinary cleaning girl comes in and admits to her own use of magic, her mothers and by implication all women’s knowledge of a far older and more powerful practice than all the science in the world.

The ending is neat and tidy, and is perhaps the most traditional element of the book, but what stays with you is the concepts, the power of key scenes and the genuine sense of unease he generates.  There is a strong feel of Weird Tales to the novel, something that faded from Fritz’s work as his style became more distinct (it is still apparent I feel in Gather Darkness), and that is one of the pleasures of the novel. 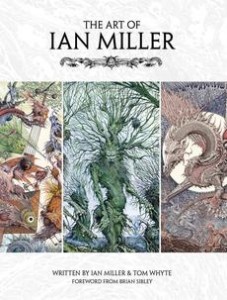 Lastly, was the beautiful book, The Art of Ian Miller.  The rather wonderful blog by unsubscriber brought this to my attention, and it is simply captivating.

Ian has done a wide range of SF / Fantasy  / Horror covers, and many of you will recognise his work if you see it.  His spidery organic art is just astonishing and demands attention, and I found myself noticing new details and flourishes in every illustration.

237 Talking Statues Etc : A Bit of the Dark World : A Deskful of Girls : A Hitch in Space : A Pail of Air : A Rite of Spring : Adept's Gambit : Adventures of a Balloon : Alice and the Allergy : America the Beautiful : Answering Service : Appointment in Tomorrow : art : Bazaar of the Bizarre : Beauty and the Beasts : Belsen Express : Black Corridoor : Black Glass : Black Has Its Charms : Blog : Bread Overhead : Bullet with His Name : Business of Killing : Cat Three : Cat's Cradle : Catch That Zeppelin! : centipede press : Children of Jerusalem : Clark Ashton Smith : Claws from the Night : Collection : Coming Attraction : Concerning Tribalism and Loving the World : Crazy Annaoj : Cry Witch! : Damnation Morning : Dark Wings : Deadly Moon : Diary in the Snow : Do You Know Dave Wenzel? : Dr. Adams' Garden of Evil : Dr. Kometevsky's Day : Endfray of the Ofay : Far Reach to Cygnus : Femmequin 973 : Four Ghosts in Hamlet : Friends and Enemies : Fritz Leiber : Further Adventures of a Balloon : Gonna Roll the Bones : H P Lovecraft : Hatchery of Dreams : Horrible Imaginings : Hugo : I'm Looking for "Jeff" : Ill Met in Lankhmar : In the Beginning : In the Witch's Tent : In the X-Ray : Induction : Insanity(2) : Knight to Move : Kreativity for Kats : Lankhmar : Later Than You Think : Lean Times in Lankhmar : Let Freedom Ring : Lie Still, Snow White : Little Old Miss Macbeth : Mariana : Martians, Keep Out! : Midnight by the Morphy Watch : Midnight in the Mirror World : Mirror : Moon Duel : Mr. Bauer and the Atoms : Mysterious Doings in the Metropolitan Museum : Nice Girl with Five Husbands : Night Passage : No Great Magic : One Station of the Way : Our Lady of Darkness : Our Saucer Vacation : Pipe Dream : Poor Superman : Predator Universe : Privacy : Quicks Around the Zodiac: A Farce : Ray Bradbury : Replacement for Wilmer: A Ghost Story : Riches and Power : Richmond Late September 1849 : Rime Isle : Rump-Titty-Titty-Tum-TAH-Tee : Sanity : Schizo Jimmie : Scream Wolf : Sea Magic : Semicentennial : Ship of Shadows : Skinny's Wonderful : Smoke Ghost : Snow White : Social Inventor : Space-Time for Springers : Spider Mansion : Stardock : The 64-Square Madhouse : The Adventurer : The Automatic Pistol : The Bait : The Beat Cluster : The Big Engine : The Big Holiday : The Big Time : The Big Trek : The Black Ewe : The Black Gondolier : The Bleak Shore : The Button Molder : The Casket-Demon : The Cat Hotel : The Circle Curse : The Cloud of Hate : The Creature from Cleveland Depths : The Curse of the Smalls and the Stars : The Dead Man : The Dealings of Daniel Kesserich : The Death of Princes : The Dreams of Albert Moreland : The Enchanted Forest : The Enormous Bedroom : The Foxholes of Mars : The Frost Monstreme : The Ghost Light : The Girl with the Hungry Eyes : The Glove : The Goggles of Dr. Dragonet : The Good New Days : The Green Millenium : The Haunted Future : The Hill and the Hole : The Hound : The House of Mrs. Delgato : The Howling Tower : The Improper Authorities : The Jewels in the Forest : The Last Letter : The Lion and the Lamb : The Lords of Quarmall : The Lotus Eaters : The Lust of the Alien : The Man Who Made Friends with Electricity : The Man Who Never Grew Young : The Man Who Was Married to Space and Time : The Mer She : The Mind Spider : The Moon Is Green : The Mouser Goes Below : The Mutant's Brother : The Night He Cried : The Night of the Long Knives : The Number of the Beast : The Oldest Soldier : The Phantom Slayer : The Power of the Puppets : The Price of Pain-Ease : The Reward : The Road to Jordan : The Sadness of the Executioner : The Secret Songs : The Seven Black Priests : The Ship Sails at Midnight : The Snow Women : The Snowbank Orbit : The Sunken Land : The Terror from the Depths : The Thirteenth Step : The Two Best Thieves in Lankhmar : The Unholy Grail : The wanderer : The Winter Flies : The Wrong Branch : Their Mistress, the Sea : Thieves' House : Thought : Thrice the Brinded Cat : Time Fighter : To Arkham and the Stars : Trapped in the Sea of Stars : Trapped in the Shadowland : Try and Change The Past : Under the Thumbs of the Gods : Waif? : Wanted - An Enemy : What's He Doing In There? : When the Change-Winds Blow : When the Sea-King's Away : Yesterday House : You're All Alone