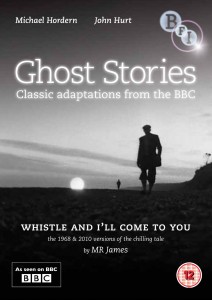 One of the Christmas presents I received (and have only just watched) was the DVD release of the BBC filmed versions of M.R James Whistle and I’ll Come to You.  The DVD is great and I enjoyed both the original and the new interpretation, though I felt the pacing of the Miller versions better suited the story (though I did enjoy the scrabbling fingers under the door in the new version, a distinctly j-horror element that worked rather well.) 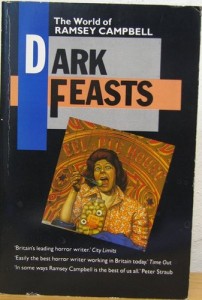 One of the extras was Ramsey Campbell reading his story ‘The Guide’, and also a very interesting (if badly shot) introduction by Campbell, where he talks about James, as well as his successors, during which he reads a little of Smoke Ghost, as well as talking about Leiber and his ghost stories.  Campbell has included Leiber’s fiction (including Dark Wings in Superhorror) in the numerous anthologies he has edited.

I am sure most of the readers of this site have read Ramsey Campbell’s excellent work, if you haven’t, then rush out and buy some now! Ramsey is a great admirer of Fritz and his work (and Fritz liked Campbell’s The Doll Who Ate His Mother), and he has spoken of seeing Leiber’s cycle of Chicago and San Francisco horror stories as something of an inspiration.

I first discovered Ramsey Campbell in the late eighties when I purchased Dark Feasts, which has a glorious cover.  I can think of no other author who is so efficient at creating an unsettling mood, whose stories are both dreamlike and pin sharp at the same time. 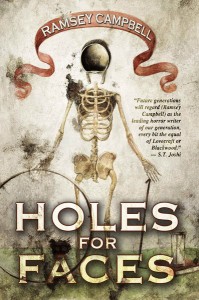 Dark Feasts is rammed full of fine stories and I cannot recommend it highly enough.  He has has produced a fine array of novels as well, from The doll who ate his mother, right through to The creatures of the pool, which I have only just finished, and thoroughly enjoyed.

I also purchased one of Dark Regions Press beautiful editions of his new collection Holes for Faces, which is as good as anything I have read by him, and copies are still available. My favourite?  Probably his wonderful chap book, Needing Ghosts, a story that has stayed with me since first reading it in the early nineties. So next is Ghosts Know, which is sitting on my bookshelf…

A ghostly blast from the past..

237 Talking Statues Etc : A Bad Day for Sales : A Bit of the Dark World : A Deskful of Girls : A Hitch in Space : A Pail of Air : A Rite of Spring : Adept's Gambit : Adventures of a Balloon : After the Darkness : Alice and the Allergy : America the Beautiful : Answering Service : art : Bazaar of the Bizarre : Beauty and the Beasts : Belsen Express : Black Corridoor : Black Glass : Black Has Its Charms : Blog : Bread Overhead : Bullet with His Name : Business of Killing : Cat Three : Cat's Cradle : Catch That Zeppelin! : centipede press : chess : Children of Jerusalem : Christopher Fowler : Claws from the Night : Coming Attraction : Conjure Wife : Crazy Annaoj : Cry Witch! : Cyclops : Damnation Morning : Dark Wings : Deadly Moon : Demons of the Upper Air : Diary in the Snow : Dr. Adams' Garden of Evil : Dr. Kometevsky's Day : Endfray of the Ofay : Ervool : Far Reach to Cygnus : Femmequin 973 : Four Ghosts in Hamlet : Friends and Enemies : Fritz Leiber : Further Adventures of the Balloon : Game for Motel Room : Gonna Roll the Bones : Hatchery of Dreams : Horrible Imaginings : I'm Looking for "Jeff" : Ill Met in Lankhmar : In the Witch's Tent : In the X-Ray : Induction : Knight to Move : Kreativity for Kats : Lankhmar : Later Than You Think : Lean Times in Lankhmar : Lie Still, Snow White : Little Old Miss Macbeth : Mariana : Martians, Keep Out! : Midnight by the Morphy Watch : Midnight in the Mirror World : Moon Duel : Mr. Bauer and the Atoms : MS. Found in a Maelstrom : Mysterious Doings in the Metropolitan Museum : Nice Girl with Five Husbands : Night Passage : No Great Magic : Our Lady of Darkness : Pipe Dream : Poor Superman : Quicks Around the Zodiac: A Farce : Ray Bradbury : Replacement for Wilmer: A Ghost Story : Riches and Power : Richmond Late September 1849 : Rime Isle : rpg : Rump-Titty-Titty-Tum-TAH-Tee : Sanity : Schizo Jimmie : Scream Wolf : Scylla's Daughter : Sea Magic : Semicentennial : Ship of Shadows : Skinny's Wonderful : Smoke Ghost : Snow White : Space-Time for Springers : Spider Mansion : Stardock : Success : Taboo : The 64-Square Madhouse : The Adventurer : The Adventures of the Balloon : The Automatic Pistol : The Bait : The Beat Cluster : The Big Holiday : The Big Time : The Big Trek : The Black Ewe : The Black Gondolier : The Bleak Shore : The Button Molder : The Casket-Demon : The Cat Hotel : The Circle Curse : The Cloud of Hate : The Creature from Cleveland Depths : The Curse of the Smalls and the Stars : The Dead Man : The Dealings of Daniel Kesserich : The Dreams of Albert Moreland : The Eeriest Ruined Dawn World : The Enchanted Forest : The Enormous Bedroom : The Feeler : The Foxholes of Mars : The Frost Monstreme : The Ghost Light : The Girl with the Hungry Eyes : The Glove : The Goggles of Dr. Dragonet : The Good New Days : The Haunted Future : The Hill and the Hole : The Hound : The Howling Tower : The Improper Authorities : The Jewels in the Forest : The Last Letter : The Lion and the Lamb : The Lords of Quarmall : The Lotus Eaters : The Man Who Made Friends with Electricity : The Man Who Never Grew Young : The Man Who Was Married to Space and Time : The Mechanical Bride : The Mer She : The Mind Spider : The Moon Is Green : The Mouser Goes Below : The Mutant's Brother : The Night He Cried : The Night of the Long Knives : The Number of the Beast : The Oldest Soldier : The Phantom Slayer : The Power of the Puppets : The Price of Pain-Ease : The Red-Headed Nightmare : The Reward : The Road to Jordan : The Sadness of the Executioner : The Secret Songs : The Seven Black Priests : The Ship Sails at Midnight : The Silver Eggheads : The Snow Women : The Snowbank Orbit : The Sunken Land : The Terror from the Depths : The Two Best Thieves in Lankhmar : The Unholy Grail : The Unhuman : The wanderer : The Winter Flies : The Wrong Branch : The Wrong Track : Their Mistress, the Sea : Thieves' House : Time Fighter : Time in the Round : To Arkham and the Stars : Tranquility or Else : Trapped in the Sea of Stars : Trapped in the Shadowland : Try and Change The Past : Under the Thumbs of the Gods : Wanted - An Enemy : What's He Doing In There? : When Brahma Wakes : When the Change-Winds Blow : When the Sea-King's Away : Yesterday House : You're All Alone